Ah Anhui.. home to Huangshan Moutains as well as 3 months worth of memories from my life circa 2004 when i spent a summer living in the capital of Anhui: Hefei. Hefei stood out for many reasons, 3 of which remain vivid recollections that I don’t think i can forget ever:

1- Abundance of coffee houses all around the city! I was extremely grateful to have access to proper blended mocha lattes in that heat.
2- huge German influence with a few shops selling exclusively German-made goods and products. Never quite understood the connection there
3- Not a single freaking good Chinese meal in 3 months unless it was dumplings/dico’s….

So, fast forward a feeeeeeeew years later, I felt i was slightly better equipped to try and visit the Anhui provincial restaurant 安徽大厦中餐厅
(map) to give it a chance at redemption; after all, Anhui Cuisine ( Hui Cai 徽菜) counts amongst the great 8 culinary traditions of China.

The restaurant is a bit out of the way on the north side of the 4rth ring road, near Anhui bridge strangely enough. It’s sits in the lobby of the Anhui representative hotel as you walk in to the left and consists of a huge banquet room with a whole bunch of big tables around. You can tell right away that this is not meant for a couple of diners but for groups.

The menu brought in the first surprise of the evening: The first few pages boosted their Cantonese dishes as well a Sichuan dishes with a mere 3 pages reserved for Anhui Specialties. My fellow diners and myself definitely noticed that and were a bit weary of that little fact. Still, the Anhui specialties were on there and we were determined to try them. 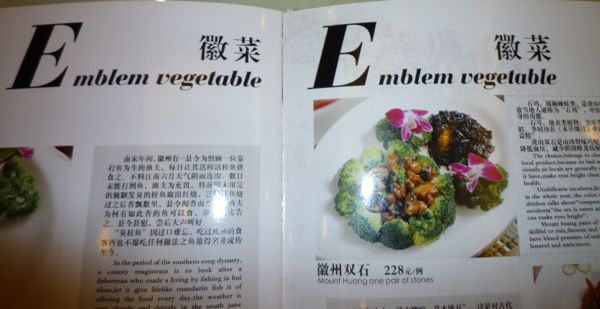 We got a couple of cold dishes to get us started including so thin sliced donkey meat, grandmother drunk fish, Jelly Fish in Vinegar and some Bamboo shoots. While not out of this world, the cold dishes were solid and the grandmother drunk fish, basically cured fish slices marinated in baijiu, was quite tasty. The Donkey meat was a bit on the dry side of the spectrum and required some vinegar to bring much needed moisture.

After that, it was time for the main dishes: we decided to go for the Huangshan Fragrant fish 黄山臭桂鱼 , fried dumplings 南瓜蒸饺 , and a couple of other dishes directly from their menu. I really wanted to try the egg dumplings 农家蛋饺 but they were out and they also forgot one of the other staple dishes we wanted. I had written down a couple of representative dishes to try there ( that i got off google) but they had none of them which was a bit sad.

While the cold dishes were quite alright, I wish I could say the same about the mains: The fragrant fish was fragrant alright, in a dead cadaver kind of way! The sauce had a distinct smell and taste that would make stinky tofu akin to a sweet rose. It was literally like there was something dead and rotting on the table.

The other dishes that managed to make it were a nondescript mush of greens and other mixed ingredients that i could hardly tell apart: a mix of wild herbs, processed meats and other ingredients that somehow were thrown in together. The one saving grace was the fried dumplings that we ended up ordering a second portion of to calm our collective hunger.

Oh the irony… I had gone to the restaurant hoping and seeking redemption for previous bad experiences with Anhui cuisine! However, instead of redemption, I found confirmation! Sure, we might have picked all the wrong possible dishes but if a provincial restaurant is showcasing cuisine from other areas in their own menu, it makes one think a bit!

I’m still not ready to condemn a whole type of cuisine as bad but it’s gonna take some time before i knowingly go out of my way to try anything from Anhui. That said, I also take solace and comfort in the fact that they make pretty darn good dumplings!!! Also, the presentation of the food was quite good

For that night, the meal for 5 persons ended up costing RMB450, most of it was food expenses. It was also the worst meal i’ve had since i left Anhui back in 2004